About 6 o'clock this morning the early risers of Isolation Gulch were astonished at the sudden appearance of a flaming airship which has been sailing throughout the Territory[source]. It was traveling due north and sailed over the main street and appeared to crash on the outskirts of town. Early reports that it was an Army balloon in distress were soon quashed with the arrival of a sight that fixed in those townsfolk present a fear of Judgement Day come early! 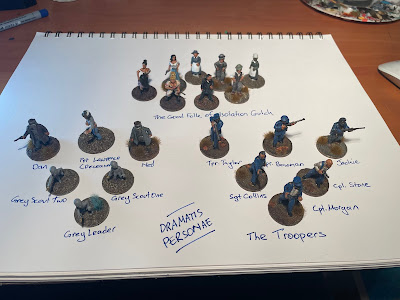 The chill morning air was rent with the terrible clanking of what appeared to be two men wrapped in iron and brandishing pistols! With these armoured strangers came three creatures, grey, diminutive, almost child-like, who soon proved to be the greatest threat the town has faced since the terrible Cholera plague of 1852. Shambling behind these intruders was a deathly, corpse-like apparition. It still wore shreds of butternut uniform suggesting it was animated at the nearby Confederate cemetery. 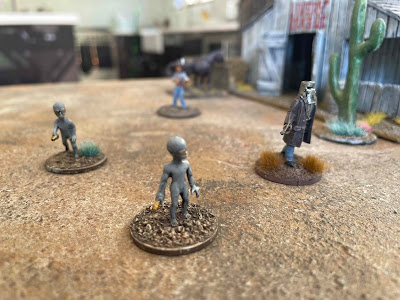 The townsfolk, having run to balconies and sidewalks to investigate the commotion, were heartened to see that the Territory Troopers had turned out of their camp by the New Cemetery to confront this strange host. 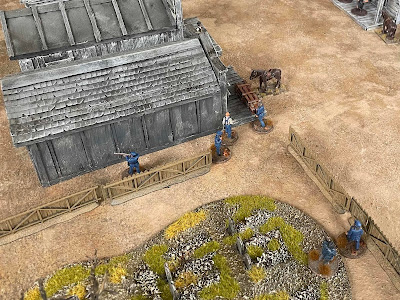 Witnesses recounted that Captain Morgan, who led the Troopers, gasped audibly when he saw the alien posse that entered the main street.

Morgan was heard to cry, "How can it be? It's the Kelly Gang! Surely my eyes deceive me! And who are those grey children they bring with them ...?"

Morgan had recently returned from two years the British Colony of Victoria and in recent nights had regaled the patrons of the Opal Saloon with the exploits on the Goldfields of these infamous, iron-suited Bushrangers.

But, this correspondent can assure his readers that the good Captain's exclamations were cut short that morning, when the abominable grey creatures unleashed their lances of fire! 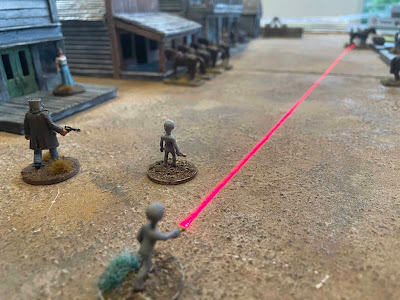 The infernal weapons shot beams of red, scalding light which struck Sergeant Collins and Trooper Bowman as they rounded the corner of the Undertakers' salon sending the rest Captain Morgan's troopers scattering for cover wherever they could find it. The smell of the charred flesh assaulted the sense of all present. 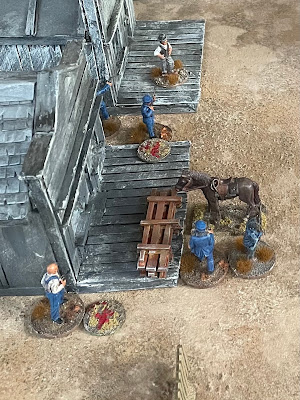 The townsfolk stood transfixed, as if enthralled by feats of illusion and thaumaturgy at a travelling circus. Then a voice called out "They must have come from that crashed airship!" Others fell to prayer, fearing they witnessed the Book of Revelation come to life before their very eyes! 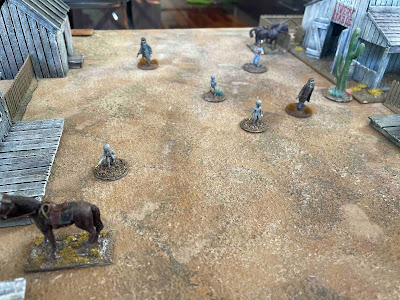 The loathsome grey creatures stalked ahead of the Kelly Gang, no doubt sensing their unearthly weapons had advantage both in range and accuracy. Jacky Jacky the Tracker was observed by all making a valiant charge into the fray to try and turn the tide of the fight. 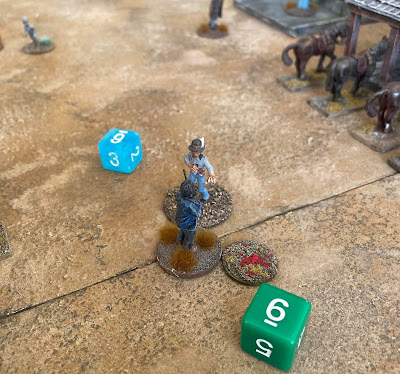 Jacky Jacky let loose a wild yelp and charged headlong down the street strait into the path of an awful, reanimated carcass from the recent Succession War. Being the bare-knuckle champion hereabouts, Jacky Jacky opened with the 'Hook to Hammerfist' blow, that won him his recent bout against"Sailor Tom" Sharkey, but the horror shrugged it off and closed on him and with his flesh rending talons and fangs. 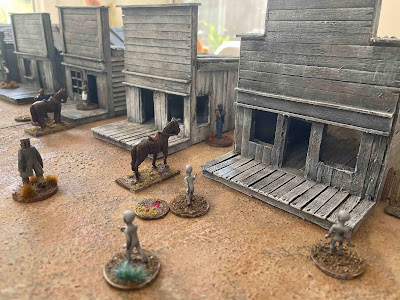 Just when the day seemed lost, Trooper Taylor appears from Isolation Gulch's back alleys and lets loose a hail of shotgun pellets at the grey invaders at close range! Ichorous fluids dripped from the pellet wounds and they fell back by the survey office, seeking cover. 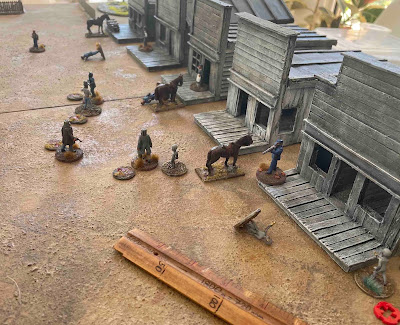 Readers! It was High Noon! Not in a temporal sense, but certainly it was the tipping point in this bitter fight for the main street of Isolation Gulch. Jacky Jacky traded blows with his undead foe. Both now terribly wounded.
Captain Morgan fell, bleeding heavily after trading shots with the Kelly's from behind a horse hitched outside the Milliner's shop.
Corporal Stone, wounded, valiantly charged the armoured bushrangers drawing blood from both.
Trooper Taylor's shotgun finished off the second grey fiend and was saved a death blow by their Leader when its fire lance fell silent! 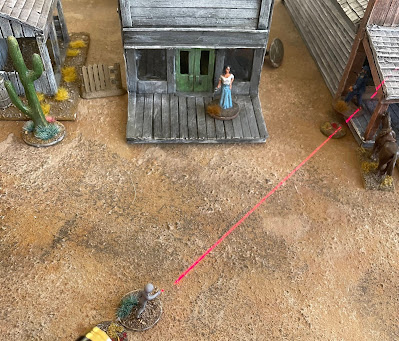 Fearing the outcome, panic set in among the good people of Isolation Gulch and, I regret to report, your correspondent was not immune to this hysteria.
Shots rang out! The infernal weapons seared the morning air. When, finally, I peered over the Saloon's balcony, bodies, human and otherwise, littered the street. The Grey Leader stood alone, it's weapon alive again, sweeping the street seeking Sergeant Collins, now our only defender! 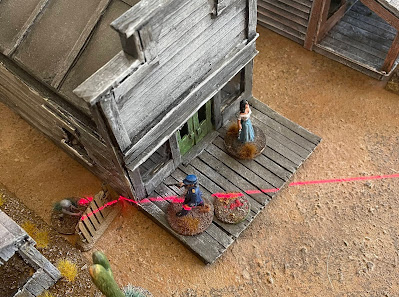 Thanks for dropping by! I've been interested in model soldiers, board gaming, reenacting and miniatures wargaming for over 40 years. This blog is to share occasional gaming reports, my painting and scratch building attempts and to connect with gamers worldwide. I've had a range of interests over the years from ancients to modern and 2mm to 28mm.