I'm going back ... Back to the Blogosphere!

It's fair to say this has been a neglected blog, of late. Mostly, because I have focused in the past year on posting on my Instagram account Models From Scratch. 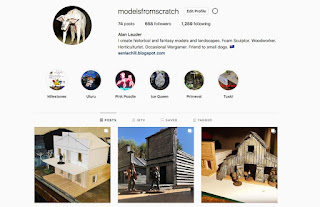 While the crafting community on Instagram and YouTube are a wonderful bunch, and it's a great platform to display your work, blogs provide a great opportunity to give more detailed posts and (importantly) somewhere to record your techniques. There is nothing worse than nailing a colour scheme only to go back a year later and not being able to reproduce it!

Anyway, I hope to get back to more regular blogging with a focus on posts about scratch building terrain and even some gameplay (shock, horror!).

As it is for all of you, life has been dominated by social distancing for a couple of months now. In Australia we've had a fairly easy run with COVID-19 (thanks to decisive action by all levels of government). That said, the financial impact on many has been horrendous. Luckily I've dodged that so far with a job that translates well to working from home. But, the crunch is yet to come in my sector (higher education).

Over the next few posts I'll give some updates on the following projects:
Here's a taster of the upcoming posts: